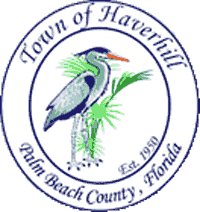 The Town of Haverhill, Florida, was incorporated in 1950, is located in central Palm Beach County just minutes from CityPlace, Downtown West Palm Beach, the Palm Beach International Airport, and great dining. Florida’s Turnpike and Interstate 95 are also only a short drive away from the approximately .61 square miles town.

Haverhill Park, a county park, is located in the Town of Haverhill, Florida, on Belvedere Road. Take advantage of the exercise course, enjoy a day of barbequing, or watch the kids play. The Town of Haverhill also operates Tommy Plyler Baseball Field (Little League – ages 10 and under).

The Town of Haverhill sponsors the Annual Picnic and Dinner and A Movie Under the Stars. The Town prides itself on maintaining a good hometown atmosphere!